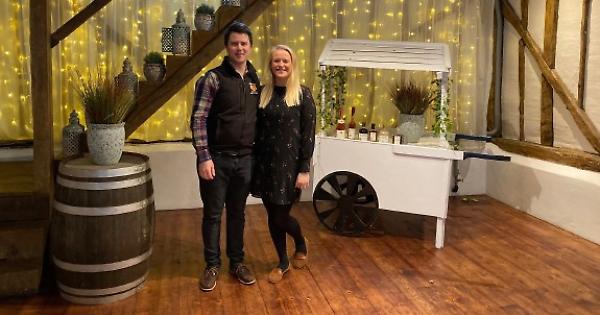 Wedding venue owners are frustrated after getting confused about the coronavirus roadmap.

Many thought they could hold ceremonies from April 12th, but it has now been confirmed that it cannot do so until May 17th, when all indoor hotel operations can reopen.

Until then, only places of worship and public buildings can be opened for weddings. All restrictions on social contact are expected to be lifted on June 21.

This means that many couples are now canceling or rearranging the dates for their big day.

Lucie Ealand, General Manager at Old Luxters Barn in Hambleden, criticized the government for not being clear about the rules.

She said, “The roadmap was the hope and they took that away. It was very unclear and the fact that it took them three weeks to sort it out is frustrating.

“When the government said last year that weddings might have restrictions, we worked on it. It is more for the couples than for us because a wedding for 15 to 30 people is not financially viable for us. We adjusted and avoided the way, but we lost money in the process.

“Some kind of support package would be very helpful because the buildings are so expensive to run and of a standard suitable for weddings.”

Ms. Ealand and her husband Donald also host weddings at Dorney Court in Windsor, and about 20 bookings at both locations are affected.

Under normal circumstances, the Hambleden venue can accommodate 114 guests and 150 for evening receptions.

“We typically have around 150 weddings a year between the two locations,” said Ms. Ealand. “Although some couples like to move later in the year, we find that their guests are uncomfortable with being in a room with many people and they asked us if they could reduce the number.”

Old Luxters Barn also has a winery and brewery that helped make up for some of the losses.

Ms. Ealand said, “Vacation has helped, but we’ve lost employees who didn’t want to go on vacation. With the thought that we’re going to open up again, we recruit, so it’s just a limbo now.

“The vacation program was very generous and we would have had to massively restructure the business without it. The industry is huge and the employment behind it is a wheel that we need to keep turning. “

The Phyllis Court Club in Henley managed to avoid problems with the rules for weddings.

Even though a handful of couples were booked, they had already decided to push the dates back.

Holly Van Biene, Sales and Event Manager, said: “We figured we could have done it from mid-April. It’s just lucky that none of our couples wanted to continue.

“At the beginning of the year when the roadmap was announced, we reached out to the couples who were about to get married and they actually decided to postpone it until later this year and in some cases until 2022. They did this because they wanted to have more than 30 guests. I have friends and former colleagues in the industry who host hundreds of weddings each year, and they don’t seem to have. “

A number of weddings in Badgemore Park have also been postponed. The venue usually seats 130 guests for a wedding and about 200 for a reception.

Marc Goodwin, Business Development Manager, said, “Fortunately, it didn’t have a big impact on us because the bride and groom were late.

“We got the same impression as the rest of the industry that we could have weddings from April 12th, albeit with existing restrictions. There wasn’t much clarity.

“It was very difficult for the poor couples who had to procrastinate all the time. It will be nice to get back to normal. “