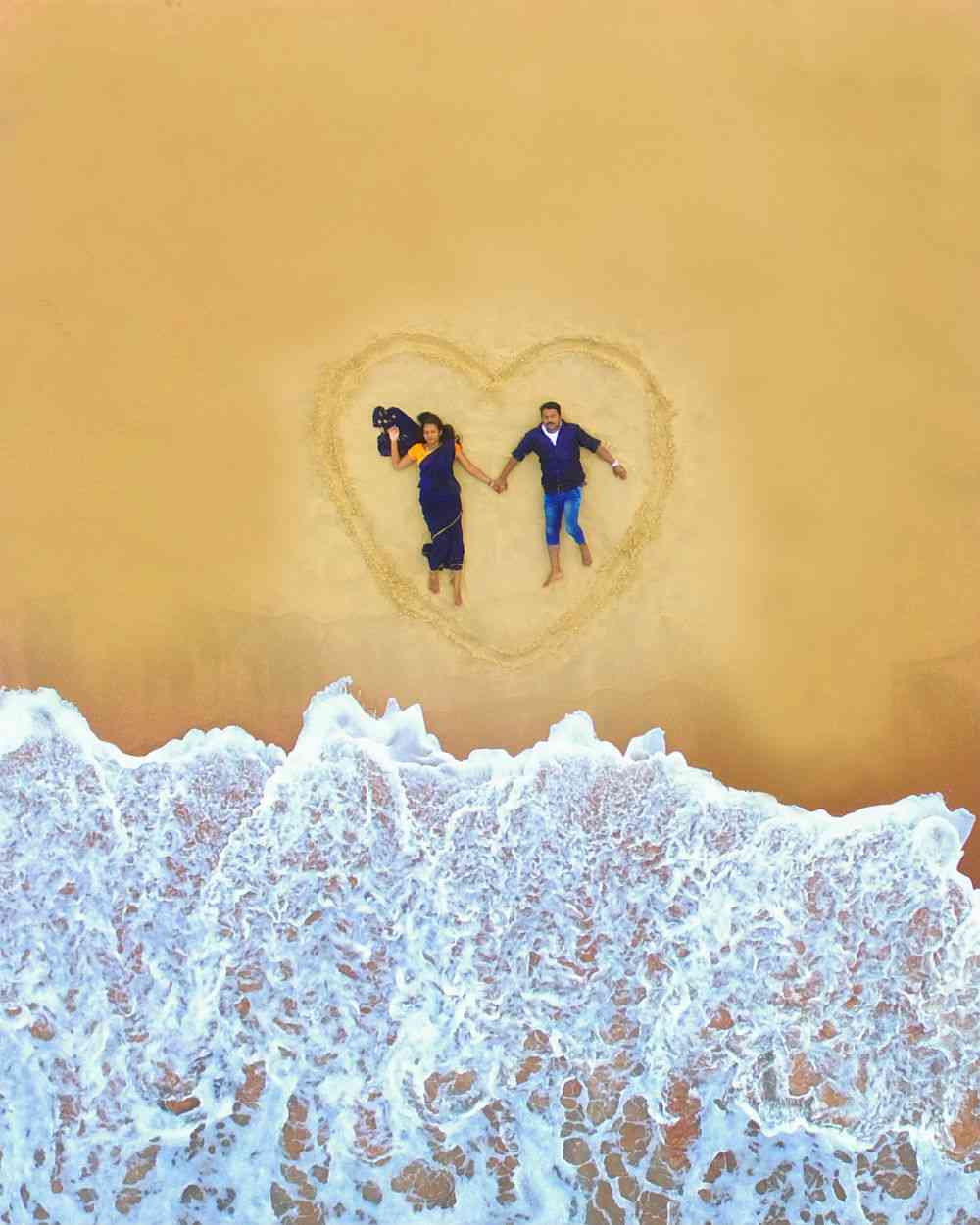 It was the day after the wedding of Bichu Prathapan and Indu Bichu in Cherthala, a rural town about an hour’s drive from Kochi. Photographer Shine Sidhardh and his team of six set up their gear on the edge of a small pond while the newlyweds lay in a traditional coracle called Uruli. Water was sprayed onto Bichu and Indu through a hose. Shine shouted instructions. The couple posed happily. The entire photo shoot took about four hours in oppressive August humidity, but the couple loved the results. “We couldn’t have asked for a better setting for our wedding album,” said Bichu, an IT expert. “All of my friends do, and that’s the trend these days.”

The photos got widespread on social media and went viral. “I got calls from relatives and some random people asking me how we got them,” Bichu said.

The evolution of wedding photography in Kerala has changed significantly over the years. It has evolved from the hastily captured images during traditionally short Hindu weddings in the state to couples who have gone to extreme lengths to have their wedding photos clicked outdoors. The ultimate goal: to make sure they go viral. The settings include the state backwaters, the beaches, and the houseboat, and it’s all an elaborate staged drama. “Couples want pratyekatha or something special these days,” said Shine, who has been a wedding photographer for more than a decade.

The Bichu and Indu photoshoot was tough, Shine says. The pond was admittedly in the back yard of his house. “But we had to make sure the boat wasn’t moving and the lights were right,” he said. “We had to capture their best expressions in this artificial rain. It was nothing short of a film set. In fact, it was like a short film. “

Indu says it was worth the effort. “We wanted a special memory of our special day. It’s a once in a lifetime event. So why not do something that gets noticed and people talk about? ”

Waseem Ahmed is co-founder of Made in Mono, a collective of wedding photographers who specialize in pre-wedding photo shoots. He lives in Chennai but travels to Kerala often. “Malayali weddings are challenging because they are very short,” said Ahmed. A Hindu wedding in Kerala can last anywhere from five to 15 minutes. In comparison, a Tamil Brahmin wedding can last up to six hours. “So there is a limited amount of time to collect content,” he said. “If you miss the moment, it’s gone. That’s why outdoor posed shots are so popular in Kerala. “

Shorter wedding times aren’t the only deciding factor. “The majority of the people in South India are influenced by what they see in films,” said Ahmed. “Weddings are more detailed now, a reflection of what people see in the cinema.”

Cinema was certainly an inspiration for Indu. “When Bichu talked to me about the idea of ​​shooting in the middle of a pond, I was really excited,” she said. “I felt like it was going to be something out of a Malayalam movie. And it was.”

A photo of Indu and Bichu’s photoshoot captured with a drone. Photo credit: Shine Sidhardh.

Wedding business is big business in India. According to a 2017 Assocham report, the industry is worth around 1 billion rupees and growing by 25% to 30% annually. It is estimated that the size of the wedding industry in Kerala is around 10,000 rupees.

Gold is an integral part of this business. According to the 2011-12 Ministry of Statistics and Program Implementation survey, monthly per capita spending on gold jewelry was highest in Kerala at almost 400 rupees. Around 200 g to 1 kg of gold were bought per wedding.

Wedding shoots with a photographer and his team of at least five assistants are not cheap. “Affordability is not a problem for people,” said Ahmed. “Photographers charge lakhs rupees these days. It depends on what a customer wants. The prices are very random. “ Ahmed says there is “a real difference” between north and south India when it comes to wedding pictures. “In the north, people want lots of pictures of the party and the uncles and aunts dancing – the family and all the aish (feast) at the wedding,” he said. “In the south, the mood is,” Yes, we want photos of the people who came to the wedding, “but the focus remains very much on the bride and groom.”

This was actually the case when Ganesh M Prasad, an engineer in Kuwait, married Aswathy S Kumar in September. “We had a traditional nair wedding,” said Ganesh. “But otherwise we both wanted to take some adventurous photos.” Her post-wedding photo shoot took place on Kattadi Beach in Alappuzha. Kattadi is the Malayalam name for casuarina trees, and the beach was named for the abundance of light and dark green trees that grow there.

“We did the filming a few days after the wedding reception,” said Ganesh. “We wore the same clothes as on that day.” He wore a suit while Aswathy wore a maroon lacha. The couple are currently separated while awaiting Aswathy’s visa to Kuwait. “I love looking at these photos of us and it keeps me going,” she said. 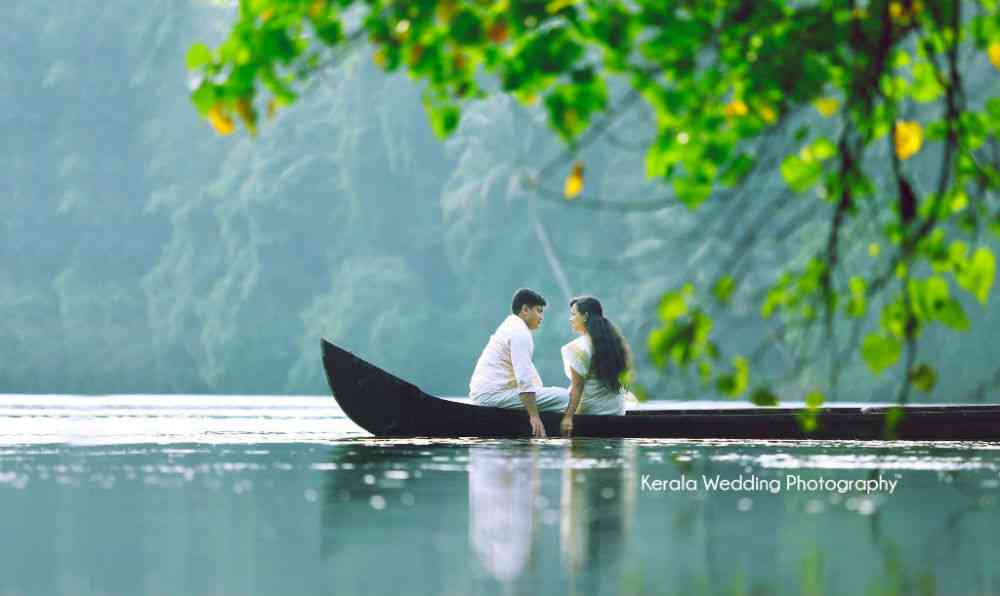 It’s not just locals who choose extravagant shots. A couple from Hyderabad, Pratibha MV and Eswar K, contacted Sajeev Varghese, the founder of Kerala Wedding Photography in Kottayam, for their wedding photos in November 2017. The woman really wanted to do the shoot “on a houseboat in the middle of the majestic lake” Vembanad, standing on the deck, ”Sajeev recalled.

Taking photos at tourist attractions in Kerala requires approval from government agencies. “We had to clear it up with the municipal corporation,” Sajeev said. “But to click photos the way Pratibha and Eswar wanted, we had to rent another boat. It was quite risky to click away in the middle of this huge lake with a couple in their wedding outfits. “When you look at the pictures, you can hardly imagine that the filming took six to eight hours.

Middle Eastern couples also come to Kerala to have their picture taken, either because they heard about the trend from their Malay friends who live and work in the Gulf, or because they visited the state as tourists during the monsoons. “So Mallikah and Yousuf came all the way from Lebanon [that] their wedding pictures [could be] something completely different from her friends, ”Sajeev said.

The reason more and more people want to post-wedding photography in Kerala is because of the state’s dramatic scenery, says Vinay Aravind, a photographer in Chennai. “It used to be a lot of fixed pictures,” said Aravind. “Then we moved on to the open trend – the non-written documentation of an event. Kerala these days is all about staging [photos]. There are dramatic lights that throw things like colors. It’s so laborious. “

Technology also seems to play a role. “Back in the day, wedding photo lighting meant you had to plug it in,” said Aravind. “Now lights are portable … Drones are in there right now. Whether you have a compositional sense or not, anyone can use a drone. Drones give you perspectives that you would otherwise never get. “ 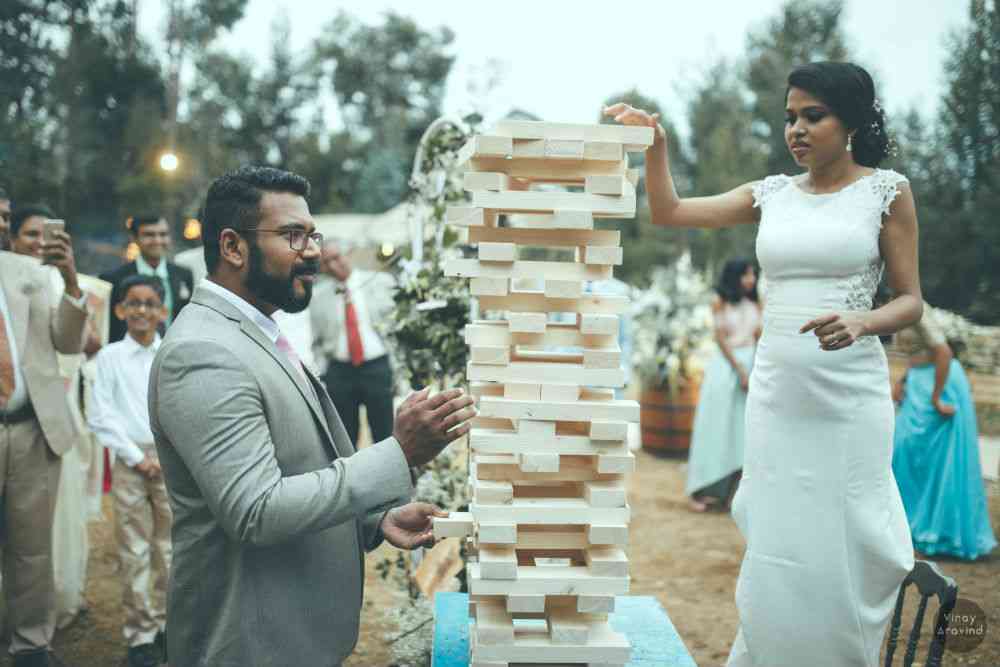 While some couples opt for exaggerated imagery, there are some who like them dramatic yet understated. For Sangita Santosham, a psychologist and singer from Chennai, photography meant the world when she married the Anglo-Indian Sandeep John in Kodaikanal. “After all is said and done, there are only photos left as memories,” said Sangita. “An aunt of mine who has a carpentry shop got these huge jenga pieces. It added such drama to some of the photographs [being] subtle and vintage. People saw the pictures on social media and some got in touch. “

Sometimes the photographer himself becomes part of the pratyekatha. Vishnu, a 23-year-old photographer from Thrissur, hung upside down from a tree to get a top-angle shot of the newly married couple. He is part of Whiteramp, a Kochi-based wedding cinematography company. “I have been practicing acrobatics since I was a child,” said Vishnu. “And I’ve taken photos before while hanging upside down. But this time I wanted to see what it would look like if I were also in the frame. ” The result? Vishnu was nicknamed vavval or bat and the photos went viral. 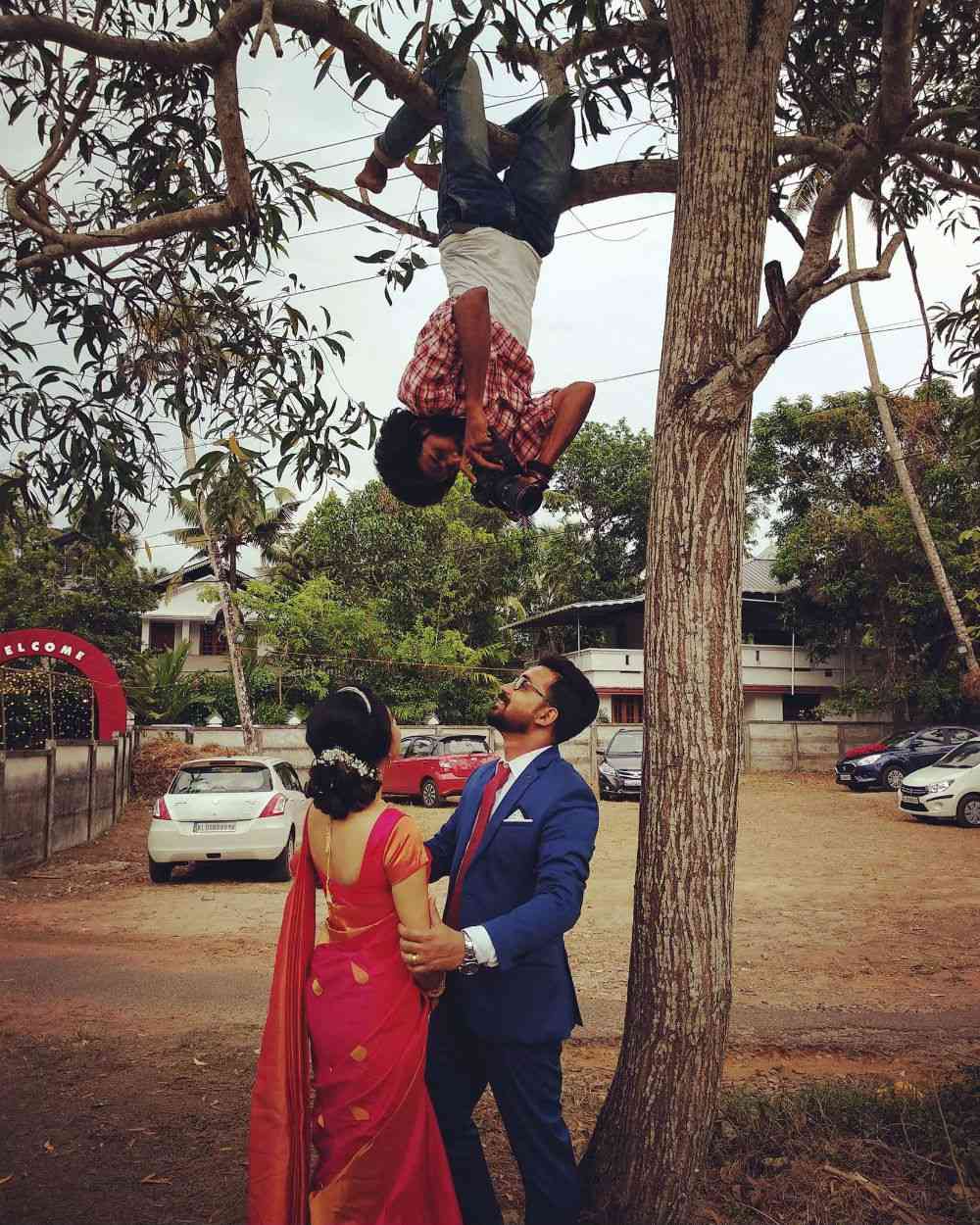