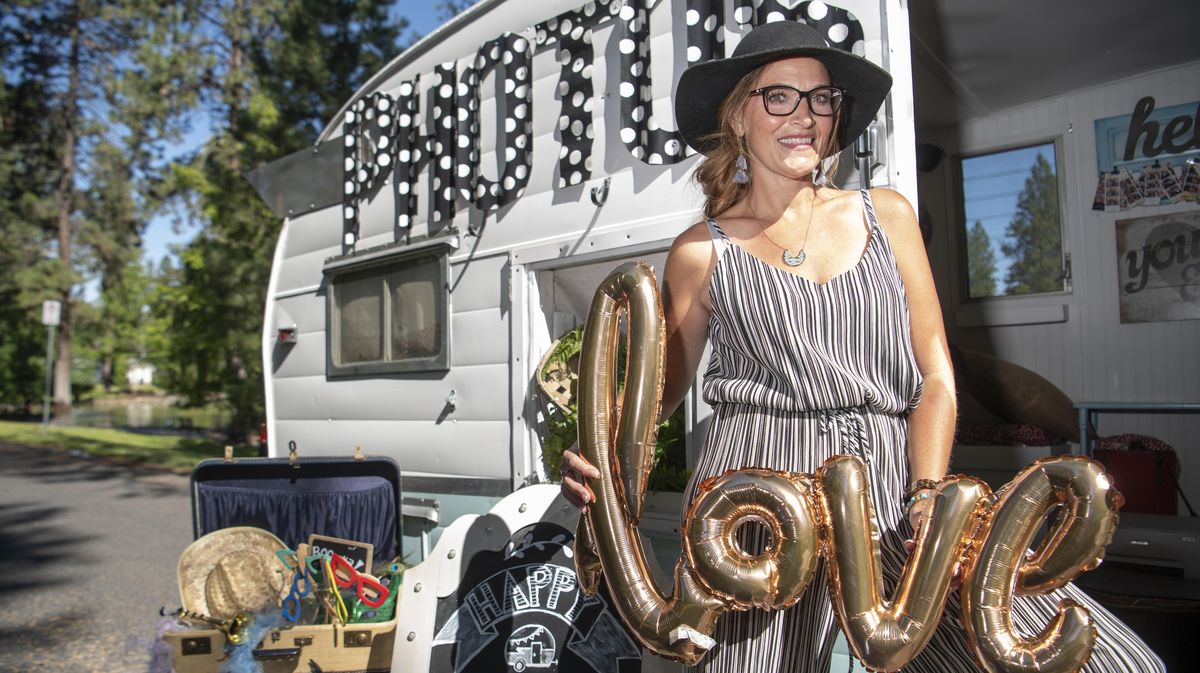 Two family businesses in Spokane have captured the nostalgic travel spirit with vintage cars that house photo booths for weddings, birthday parties and other events.

“The photo booth is the last thing people think of when planning a wedding,” said Deanna Haggerty, owner of Little Photo Bus Co. “But it’s the fun factor.”

Haggerty and her 19-year-old daughter Kyra run Little Photo Bus Co. from a 1976 Volkswagen bus. They started in January.

An older company, Happy Camper Photobooth, which offers similar services, has been in Spokane for four years. Owner Libby Russell owns two Shasta campers from 1959 and 1960 that she uses for her business.

Both companies not only offer the photo booths, but also set up a “scene” in addition to their vehicles with props such as vintage suitcases and plastic plants that complement their style.

Haggerty and Russell first met at a bridal party in January. Both said there wasn’t even an indication of competitiveness as their vehicles were unique enough to attract different markets and the demand for photo booths was good enough to keep the two companies busy.

Both owners said during the events they often hear stories from people about old memories in a VW bus or a “canned ham” camper.

“I’ve heard hundreds of camping stories,” said Russell. “People say, ‘Oh, my grandpa had one of these.'”

The nostalgia is a big selling point, Haggerty said.

About years ago Russell and her husband went to a wedding and found a photo booth, but she was disappointed to see it was just a “little black box in the corner of the room,” she said. I said to my husband, ‘How ugly is that? ‘The guy running it was on his phone half the time.

“I remember thinking this could be so much better,” she said.

She had studied photography at Spokane Falls Community College about four years earlier, which gave her the confidence to open the photo booth. But it got a vintage touch from years of selling antiques online.

“I wanted to connect these two together,” she said.

Your company has grown. Less than a year after they started, Russell bought their second Shasta camper. Russell had to go to Port Townsend, Washington, to do this. She said that they are becoming more and more popular because people are buying them for “glamping,” glamorous camping.

Russell is starting to add people to her team made up of herself, her husband, and their four children, she said.

Happy Camper Photobooth was even invited to a celebrity wedding in California last year. Dancing with the Stars’ Julianne Hough and professional hockey player Brooks Laich introduced Russell’s company at their wedding.

Prices depend on the event and the number of attendees, she said. Weddings can range from $ 695 to $ 1,295. Graduation and birthday parties cost about $ 450. Occasionally, Russell also donates her services to schools and charity events.

She said she was traveling as far as Montana and Oregon to make her photo booth available because it was one of a kind.

“There isn’t a ton in the United States,” she said.

Deanna and Kyra Haggerty bought a 1976 Volkswagen bus for $ 4,500 to start their photo booth business. They spent $ 20,000 on the restoration and painted it apple red and white.

They called her “Lucy” because it was “the hippest name we could find,” said Kyra.

The idea came to them during a trip to California for Kyra after graduating from high school. While looking for photogenic scenes, they came up with the idea of ​​taking a photo with a VW bus and found a photo booth company that was being held in a VW bus.

The two decided shortly thereafter to start their own version in Spokane. Deanna had worked in a furniture and antique store that inspired her to buy a VW bus and put money into the restoration they had bought from a schoolboy in Spokane.

“It was pretty rusty,” she said. “The panels were rusted. There were holes in the floor. ”

Haggerty says prices are negotiable for weddings, private parties, and corporate events. She said a four-hour event costs about $ 1,200 on average. She publishes photos on her website and gives the wedding couple a USB drive with all the photos from the booth.

“Brides love the idea of ​​a Pinterest-type wedding,” she said.