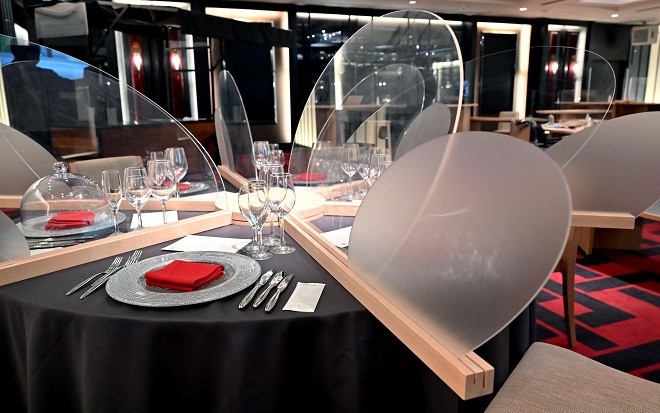 It looked like a typical wedding reception when about 90 guests lifted their glasses as the groom’s work supervisor made a toast.

However, at the wedding in the early afternoon of April 29th in Happo-en in Tokyo’s Minato Ward, glasses were filled with non-alcoholic champagne.

The venue first prepared to serve the traditional beer, sake, wine, and other drinks that wedding guests usually drink.

After the 17-day state of emergency was imposed for Tokyo and three other prefectures on April 17, wedding venues in the capital were asked to stop drinking and close their doors until 8 p.m.

At the suggestion of the operator of the venue, the newly wed couple decided to switch all drinks to non-alcoholic versions.

The bride and groom set their wedding date last summer and expected the pandemic to be brought under control by spring 2021.

“We selected the drinks ourselves and paid attention to how well they go with the food. That’s why we thought about serving non-alcoholic drinks that also go with the menu,” said the 31-year-old bride.

Alcohol-free wedding celebrations are becoming the new norm as many venues struggle to survive the new coronavirus pandemic, forcing their operators to adapt.

The move aims to address calls to cease alcohol use in areas where the state of emergency or pre-emergency action is imposed.

While soft drinks are well received by guests, members of the wedding industry are struggling to find ways to keep their business going.

At the ceremony on April 29th at Happo-en, tThe operator provided the best possible service under unexpected circumstances. In addition to the preparation of special non-alcoholic cocktails with syrup in the theme colors, non-alcoholic sake and other drinks were also ordered.

The operator received positive feedback from guests who said they had the opportunity to try a wide variety of drinks, even though some of them didn’t like alcohol.

“Without the coronavirus pandemic, this wedding ceremony would not have been possible. It became a unique ceremony that is unforgettable,” said the groom.

According to Happo-en, around 100 newlyweds had their wedding parties booked between April 29, when the Golden Week holidays began, and May 11, when the state of emergency was originally supposed to end.

Of these, around 10 percent have postponed their appointments. However, the rest decided to take thorough infection prevention measures and serve soft drinks in order to hold the wedding banquets as planned.

Happo-en has implemented a party schedule to offer an enriched selection of soft drinks. Employees are busy securing drinks, placing bulk orders at liquor stores, and buying additional drinks from supermarkets to make up for bottlenecks.

Members of the wedding industry are trying their best to organize wedding banquets as they face financial hardship in the face of the coronavirus pandemic.

The market is valued at 1.4 trillion yen ($ 12.8 billion) annually, including the cost of banquets, according to the Bridal Institutional Association.

It is estimated that the industry’s revenue was about 450 billion yen, and lost nearly 1 trillion yen, for the year ending March 2021.

With the average cost of a wedding ceremony and banquet of about 3.6 million yen, the association said at least 200,000 couples have been forced to postpone their wedding or suffer other setbacks.

The industry was particularly hard hit in May last year when the first state of emergency was declared nationwide. Revenue was down around 98 percent year over year, with an estimated drop of around 129 billion yen.

The association added that the industry lost around 42 billion yen between January and March this year, when the second state of emergency was in effect in Tokyo, Osaka and other prefectures.

Officials from Tokyo and other prefectures also urged wedding venues to stop karaoke machines and close their stores at 8 p.m. to avoid the 3Cs (tight and crowded rooms and close contact with others) They also made other requests, including requests to end wedding events within 90 minutes and limit the number of guests to 50 or the total number of attendees to up to 50 percent of a venue’s capacity.

Before the final emergency was declared, industry officials visited the prime minister’s office on April 23 to ask the government not to ban wedding ceremonies.

“We all now want to find a partner with whom we can have a strong bond,” said famous bridal designer Yumi Katsura, who also attended the meeting. “We’ll be racking our brains to find ways to prevent coronavirus infections even at modest ceremonies.”