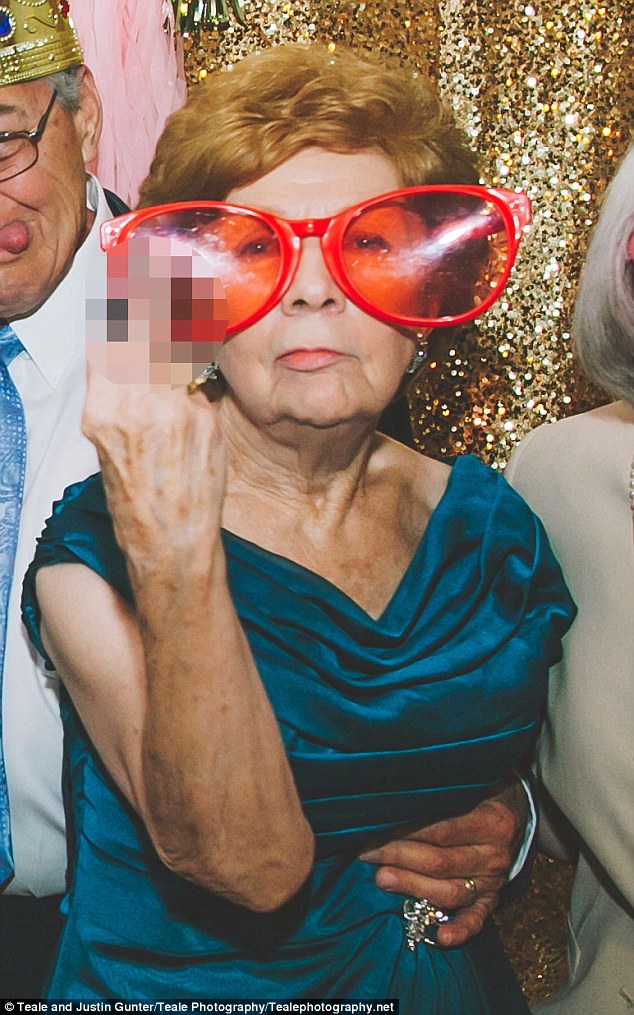 A group of grandparents proved they were still young by taking some risky poses in a photo booth this weekend.

The fun-loving snap, taken at a Nashville wedding, received more than 788,000 views after being shared on the social networking website Reddit.

In the pictures, the six elderly people wore glittering hands, huge sunglasses, and crazy-looking crowns – and one man even brought a touch of Viking to the party with a horned helmet.

The bride and groom’s friend Michael Riddering shared the priceless moment with the world of AgoraApp – after his friend and friend sent the photo to the groom’s sister, William Weiss.

The bride and groom, who wanted to remain anonymous, are said to have been tickled by the photos taken by Justin and Teale Gunter of Teale Photography.

The groom’s grandmother, dressed in green, snaps her finger at the camera while another pensioner grimaces defiantly.

In an interview with Buzzfeed, William said, “This was the first official wedding photo the bride saw.

‘She laughed pretty damn hard about it. It was sent without a label, just with a dot dot dot. ‘

On the antics of the older group, Weiss added, “It’s definitely not their typical behavior. They are very respectful and when I saw the photo I couldn’t believe they did. ‘

The post in a Reddit Pics chat room has already received numerous comments from users who immediately dealt with the Nordic impersonator: “If the Viking on the left picked me up from school and told me he was my new father, I wouldn’t I won’t even question it.

Another user named through_a_ways said, “His face is terribly funny.”

This lady, who wore neon pink glasses over her usual glasses, grimaced when the shutter went off

Apparently the groom’s grandmother had let go earlier that evening and made some serious moves on the dance floor.

William said, “She was out there all night and loved dancing with the groomsmen.”

However, the older group is unlikely to understand the extent of their actions since they “don’t know what viral means,” added Weiss.

This isn’t the first time parents or grandparents have put their unconventionally cool stamp on their son or daughter’s big day.

Caleb Stultz and Amy Drake’s parents, both 22, planned a highly choreographed dance routine at a wedding reception in Clackamas, Oregon on July 7th.

The couple performed the dance to the delight of guests after their ceremony at Clackmas Bible Church and performed a spirited routine to Pharrell Williams’ hit Happy.

The groom’s mother shuffled awkwardly to the beat while the bride’s father performed a classic papa dance and performed the choreographed movements in the barn.