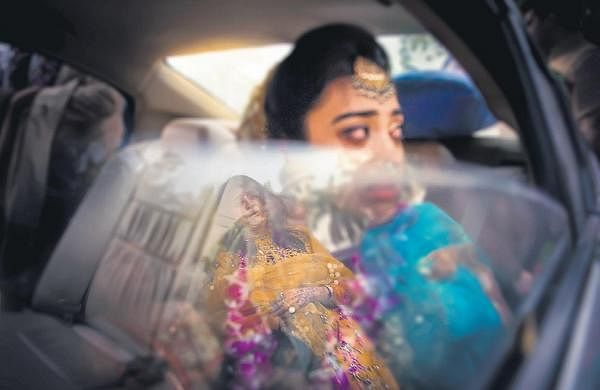 The duo have pioneered the new wave of modern wedding photography since their first wedding shoot in 2008 and are known for their quirky, contemporary approach and cinematic video for capturing Indian marriages.

Although they have been shooting around the world for over a decade, they still hold a special place in their hearts for weddings at their home base in Delhi. Here they give us an overview of their two most challenging recordings.

Image 1: This shot was taken during the Vidai and is one of those unusual, unplanned images that are happening right now.

At the ceremony in Delhi in December 2018, I happened to be in the right place at the right time when the tearful bride looked at her mother with the tears in her eyes which happened to be perfectly reflected in the glass of the car.

Photo 2: This photo might not look challenging, but the circumstances behind it certainly were! At that Gurugram wedding in February 2018, we had some brilliant portrait locations planned just to rain the entire plan.

After that we found ourselves in a standard banquet hotel room where we didn’t have much to do.

We wanted to do something outside the box so we managed to get some mirchi lights out of the hotel decor, hold them in front of the camera and voila! A picture to remember. It was taken by Fujifilm XT3, 35mm / 1.4, at ISO 200, 1/160.